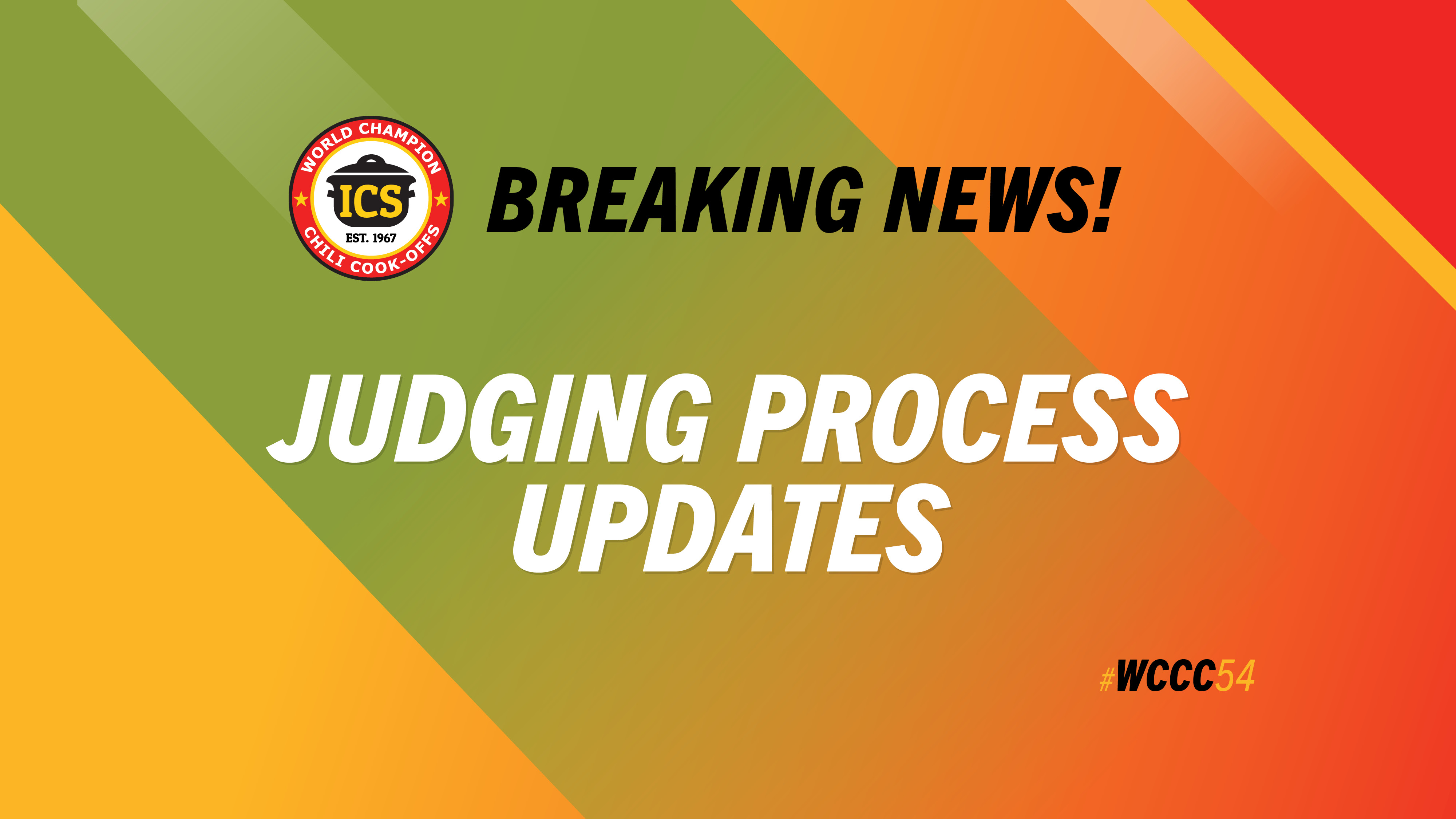 The International Chili Society (ICS) has made several new changes to the entry and judging process that will be implemented during the 54th Annual World Championship Chili Cook-off (WCCC) to be held this September in Myrtle Beach, SC.

For the first time, ICS will require advance registration for its judges in every professional category of the WCCC. Anyone can apply to be a judge; however, ICS has established a process that will give priority to Certified Chili Judges in the pro category, and  E.A.T™ certified judges for the new Open Championship, which will be conducted for amateurs who have won a non-ICS sanctioned event. Requests for judging assignments will be accepted beginning May 1st, 2021 through the ICS website. Judging confirmations will be made by July 30, 2021.

Once assigned a position, judges will then follow a new integrity model that is used at the World Food Championships: they will be sequestered from the cooks as they arrive and get signed in for their judge’s table. This ensures that judges do not see any cooks approaching the turn-in table, nor the assignment of the entry to a particular table. Additionally, all competing chili cooks will be prohibited from entering the judging tent while officials are tasting or scoring the entries.

“These cooks are competing for a total prize purse of almost $100,000,” said Mike McCloud, President and CEO of ICS. “At any contest, especially our annual championship, fairness and integrity are top priorities. Chili cooks spend a lot of time and money getting to this world championship moment. So we are excited to announce new policies and processes that will ensure the entire judicial process.”

Another new process that ICS will be implementing this year involves the turn-in window: it will now be expanded to include 20 full minutes (10 before and 10 after the official time). McCloud stated that the volume of cooks and the safety of the turn ins were key factors in making this decision.

“With 140 cooks in Traditional Red — and 100+ in several other categories — we’re going to have a lot of people turning in chili. We have to be as organized and efficient as possible to accomplish this,” McCloud explained. “The additional time should help alleviate or compensate for potential bottlenecks, and we want to make it clear to all cooks that there is no advantage for turning in late. That’s because we will begin judging entries as soon as they come in and are assigned to a table.”

Aside from the judging and turn-in processes, several other firsts will be featured at WCCC54. For example, a new Firehouse Chili Challenge (for first responders) and a Corporate Cup Challenge (for local businesses) will be presented as a People’s Choice program for charity. Additionally, chili cooks who have won a non-sanctioned event can enter the World Open Chili Championship, which will utilize the E.A.T. judging process created by the World Food Championships.

“Our goal is to feature and celebrate chili in numerous ways, including the many chili cooks who participate in other types of chili comps,” McCloud said. “Aside from rewarding the best cooks in the “professional” industry, we simply believe that all chiliheads should have an opportunity to join in on the fun at WCCC, whether it’s for charity, community or championship status.”

Since 1967, the International Chili Society (ICS) has been bringing people together over one of America's greatest culinary creations. ICS sanctions more than 100 events a year nationwide with one mission –  to continuously improve chili while raising money for charities and nonprofits. More than $100 million has been raised for charities by the chili arena since ICS was started. To celebrate each year’s pro-chili season, ICS holds a World Chili Championship Cook-off (WCCC) and crowns World Champions. To see previous winners, click here.