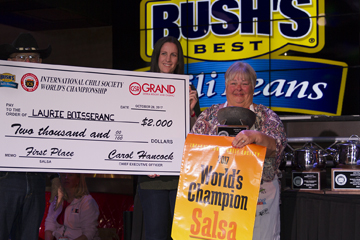 Laurie Boisseranc is a retired moving coordinator, born and raised in San Jose CA., the mother of one son, John, and wife of Ron Boisseranc. The family started cooking in the ICS in 2003. The Boisserancs were invited by a friend to cook People’s Choice Chili at The Red Bluff Roundup Cook-off… and they were hooked! The first World’s Championship Chili Cookoff they attended was in Reno 2003, where they cooked Last Chance yet failed to advance. But the friendships and fun grew! Laurie did not cook at first, then by coaxing from fellow cooks (Isabella Robinson and Ron), she began her own ICS career. Laurie started cooking chile verde only. The verde is what she likes, so that is what she cooks! She would also make an occasional salsa at home and sometimes at cook-offs. The apple doesn’t fall far from the tree as her son, John, won a few cook-offs himself in the Community Divisions. Then there is John’s son, Laurie’s 11 year-old grandson, Ryan, who has his own salsa recipe. This year, Laurie took her grandson’s recipe and made salsa at the Red Bluff Roundup Cook-off where she won first place! Needless to say, Grandma and Grandson were elated! It earned her an entry into the 51st World’s Championship Chili Cookoff in Reno. Laurie made that same recipe there and it won The World’s Championship Salsa Contest and $2000! She split her winnings with Ryan. Laurie told ICS, “We hope that one day one of our grandsons will give the competitions a try. Ron and I treasure the friendships and camaraderie that we share with all the other Chiliheads. We are Family.”

Combine all ingredients and refrigerate 12 hours to blend flavors.