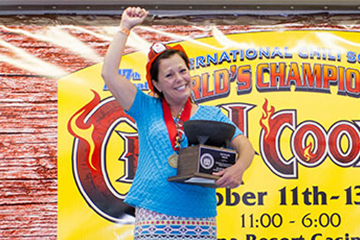 Gail Donovan, a Native Cincinnatian, started on the ICS “chili trail” in 1987. She tells us that Cincinnati is noted as the “Chili Capital” of the world because they have a chili parlor on practically every corner. Gail and her former firefighter husband, Bill “Gumby” Donovan, took on the team name of “Donovan’s Code 3 Chili,” which in the world of fire means that an extra company needs to respond to help put out the fire. Gumby’s win in his first ever cook-off got them both hooked and they never looked back! In 1992 Gail turned in her assistant apron and started cooking on her own. She’s now a master cook in Traditional Red and Chili Verde. Let’s not forget about Salsa! Gail has earned 10 First Place wins, 10 Second Place wins, 9 Third Place, and 1 Fifth in her “salsa career!”

Mix all ingredients together.

Just before serving, adjust Tabasco and salt to taste.