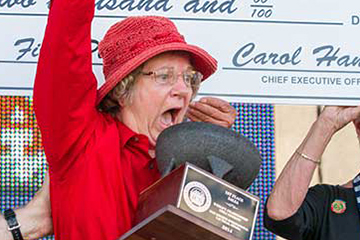 Barbara Ward (AKA “Paupers”) an inaugural ICS All Star, has cooked competition chili since 1985, entering cook-offs in the United States, Canada and Mexico. She has qualified for the WCCC in the Traditional Red category 19 times, achieving the level of Grand Master! Barbara also qualified for the WCCC in the Chili Verde category 8 times, and in the Salsa category 15 times (where she became the World Champ in 2007 before her next win in 2014!)

In a large bowl, combine and mix all ingredients except the salt and lime juice.

Just before serving, add the salt and lime juice to taste.