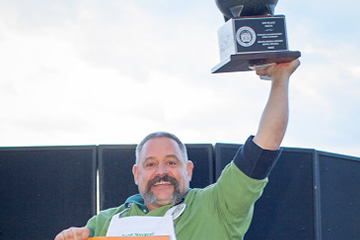 It all began for Scott Navaroli – from Southborough, MA - after he attended a NY chili cookoff as a spectator. While there, he turned to his wife and said, "I can make a better chili than this!" A short time later in 2003, Scott entered his first official cook-off. The chili circuit has taken him across the US, cooking in 15 States and in more than 100 cook-offs. Scott believes that there is nothing better than the feeling of having friends across the country, and we agree!

Finely chop the scallions and cilantro.

Mix all ingredients together, adding heat and salt to taste.