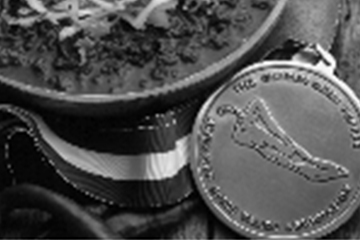 Some of the pioneers who started or attended the first World's Championship were: Carroll Shelby, Tom Tierney, H. Allen Smith, Wick Fowler, Dave Witts, Bill Neale, Frank X. Tolbert, Father Duffy, Ormly Gumfudgin, and Bill Doner to name a few. It was a shoot-out between Wick Fowler and H. Allen Smith. There were three judges; Hallie Stilwell, Floyd Schneider and Dave Witts. Hallie voted for H. Allen, Floyd voted for Wick. Dave Witts, the self- proclaimed mayor of Terlingua and third judge, spat out both samples and declared his taste buds were ruined! He called it a draw and declared a moratorium for one year.

In a 4-quart pot, brown meat in oil or butter or in a blend of the two.