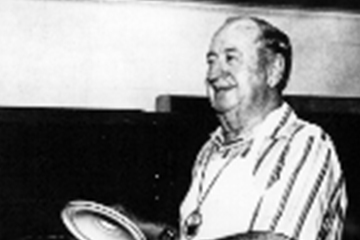 They had so much fun at the first one, it was decided to have another! (Besides, Shelby and Witts hadn't sold those rocks they called the Terlingua ranch) H. Allen was ill due to what he called an allergy flare-up (some said he'd eaten some of his own chili). Woodruff "Wino Woody" DeSilva, former manager of Los Angeles International Airport, took his place and fired up his pot against Wick Fowler in the second World's Championship. Scott Carpenter (astronaut) served as head judge. Someone had stuffed the ballot box for H. Allen and Carpenter called for a re-vote. The ballots were cast, and before the box was opened, a masked bandit brandishing a rifle, grabbed the ballot box and threw it down a mine shaft. Dave Witts (still the mayor of Terlingua) declared nolo contendere until the following year.

In a skillet, brown onion in oil, seasoning with salt and pepper.

Add garlic and 1 TSB of the oregano.

Add this mixture to the chili pot.

In a paper sack, shake together the woodruff, cayenne pepper, paprika, New Mexico chili powder, cumin, the remaining 3 TSB oregano and the chipeno.

Add the blended spices to the chili pot.

Add enough water to cover the meat and simmer at least 2 hours.

Cool the chili; refrigerate it overnight.

Skim off the excess grease.

Reheat the chili to the boiling point and stir in a paste made of the flour and a little water to thicken the mixture.

Stir constantly to prevent sticking and scorching, adding water as necessary for the desired texture.