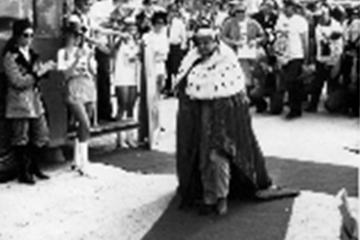 History will show that this was a very important year for the World's Championship Chili Cookoffs. C.V. Wood, Jr., the man who built Disneyland for Walt Disney, brought the London Bridge to Lake Havasu, an ex-Texan from Amarillo, then living in Beverly Hills, threw his pot in the competition. Wick Fowler, representing Texas, and Joe DeFrates, the Illinois champion, were soundly defeated by the man who would call himself the "UndeFeeted UndeniaBull World's Champion". C.V. Wood, Jr. known as "Woody" captured the World's Championship with the flair of Cecil B. DeMille. Woody started what is now known at all chili cookoffs, as "showmanship". He had a large rooting section, t-shirts with his name on them, a monstrous spice chest, a couple of Hollywood starlets as assistants and an electronic chili gauge. This device had knobs for altitude, temperature and humidity. When the two probes were placed in Woody's chili it registered "EXCELLENT," setting off a siren. We had our first winner! But more important, a team that would play an important role in the future of Chili Cookoffs...... Carroll Shelby and C.V. Wood, Jr.

Combine chicken with water in a large pot and simmer 2 hours.

Strain off broth and reserve chicken for other use, or use canned chicken broth.

Render suet to make 6-8 TBS oil or use cooking oil.

Trim all fat and bones from pork and cut it into 1/4 inch cubes.

Trim all fat from flank steak and cut it into 3/8 inch cubes.

Boil chilies 15 minutes or until tender.

Remove seeds and cut the chilies into 1/4 inch squares.

Add the tomatoes, celery, chilies, beer mixture and garlic to the chicken broth.

Pour about a third of the reserved suet or oil into a skillet, add pork and brown.

Do only half total amount at a time.

Add the pork to the broth mixture, cook slowly 30 minutes.

Brown beef in the remaining oil, about one third of the total amount at a time.

Add the beef to the pork mixture and cook slowly about 1 hour.

Add onions and peppers. Simmer 2-3 hours until meat is broken down, stirring with a wooden spoon every 15 to 20 minutes.

Add lime juice, about 3/4 tsp. per quart, or juice of whole lime for full recipe.