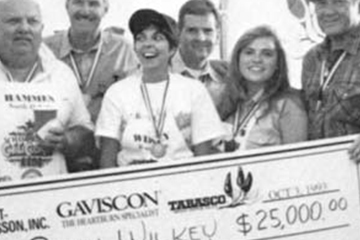 Reno, Nevada the "biggest little city in the world" called and we went. The World's Championship Chili Cookoff became for the first time a two day festival with food vendor, arts & crafts and micro brewery's. McBride & The Ride a hot country western band was booked and chili heads lined Virginia Street in downtown Reno, Nevada. Cathy Wilkey, the Washington State Champion placed her name in history and was $25,000 richer as the 1993 World's Champion. Don Hammes the North Dakota State Champion was second, third place was Laurin Lentz the North Coast Regional Champion, fourth place went to the Kentucky State Champion Ann Hoover. The crowd, and the judges deemed it "the year of the woman. "It was estimated that over 50,000 people attended the World's Championship.

Brown meat in Wesson Oil for about 1/2 hour over medium heat.

Bring to a boil and cook for 15 minutes.

Reduce heat to light boil and add 1/2 of the garlic.

Add 1/2 half of the chili powder and cook for 10 minutes.

Add Hunts tomato sauce with the pulp from the dried peppers and remaining garlic.

Cook for one hour on medium heat stirring occasionally.

Simmer for 25 minutes on low to medium heat, stirring occasionally.

Turn up heat to light boil and add Tabasco pepper sauce, salt to taste, brown sugar and juice of lime.

Simmer on medium heat until you are ready to enter this championship recipe at your next cookoff or to a group of hungry chili lovers.