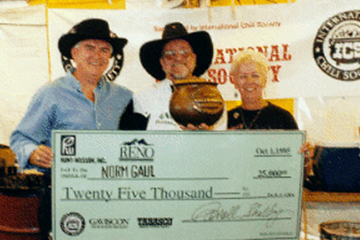 The World's Championship Chili Cookoff has become a three day festival with over 100 arts & crafts, food vendors, and micro brewery's. Buckwheat Zydeco was the featured performer with his Creole, Zydeco, reggae, rock n' roll blend of music. Barron Hilton was chief judge as the largest number of contestants competed in the history of the ICS. The Semi Finals had been added for winners of Districts Cookoffs around the country and over 200 contestants fired up their stoves in quest of the $25,000 first prize money and title of World's Champion. One hundred and twenty finalists lit their stoves as Lena Shelby in Swedish and Margie Petersen in English announced "Ladies & Gentlemen, light your stoves." Norm & Bobbi Gaul, winners from the Semi Finals totaled the most votes and won the $25,000 and put their name in chili history as the 29th World's Champions. Bob Dyer the Western Champion, was second, Red Brecke from the Semi-Finals was third, Marilee Barrett the Montana Champion was fourth and the Alberta Champion Janis Davidson was fifth.

Stir in chile powders, chili powder, cumin and salt and bring to boil.

Meanwhile, add 1 teaspoon oil to a skillet and saute onions and garlic over low heat until tender.

In same skillet, adding a little oil as needed, saute meat, 1/3 at a time, until no longer pink and add to sauce.

One half-hour before serving, adjust seasoning and heat with salt and Tabasco.