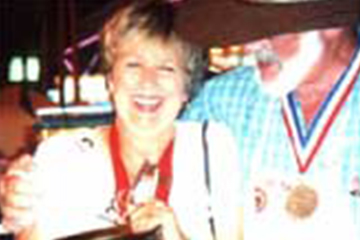 Maud Swick of Bakersfield, California is the 1999 World's Chili Champion, and is also $25,000 and one Bronze World's Champion Chili Pot richer. Maud, representing the Sespe Creek Regional Championship won the competition of 123 chili cooks qualifying from around the world. She also qualified and respresented the State of Nevada in the 1st World's Chili Verde Championship as well as qualifying and entering the 5th World's Salsa Championship. A very busy lady during the Championship weekend. Maud and her husband George (who qualified for Salsa Championship) joined the ICS at the 1984 World's Championship where they were a part of Darrell Beller's Chili Team, placing 4th in the world at that time. Fifteen years later she was on her own and took the title!

Add to the chicken broth

Simmer 1 hour and Salt to taste